You are here: Home » About Us » History

At the time we found a Convair 240 serial #147 it had been in storage for two years without engines or props. It was vandalized in 1996, the damage sustained was due to smoke, heat and fire. The extent of the damage included the aft lavatory, lower rear cargo compartment, some seat cushions, head liner, carpeting and extensive smoke damage.

We replaced both engines and the starboard side #2 prop. The port side #1 prop assembly is currently ready for replacement. The lower aft cargo compartment on the starboard side has been cleaned, inspected, zinc cromated and a new cargo liner has been installed. The aft lavatory has been stripped of all panels, inspected, zinc cromated and is ready for the installation of new paneling and interior fixtures. All other smoke & fire damaged areas have been completely cleaned and inspected. We have finished with the corrosion control and replacing of rivets and panels on the wings. The wing spar was found to be in good condition.

The remainder of the restoration would be as follows. The exterior will be completely stripped down to the aluminum finish and painted in the original paint scheme and trim of 1949 as delivered.

The interior of the Convair will be as follows, new dark blue carpeting, the head liner will be replaced, aft lavatory will be completely rebuilt, forward galley moved aft to original area, damaged seat cushions replaced as necessary, seat coverings to match the original 1949 interior, crew seats need recovering, and reconditioning of avionics and cockpit area.

Upon completion, the Convair 240 will be rededicated the Flagship Scranton as it was originally delivered on 27 Feb 49. The original tail number will also be retained as delivered, N94270.

This Convair 240 will be the only flying Convair 240 in passenger configuration, all other Convair 240′s still flying are hauling freight. The total number of Convair 240′s flying in the world today is just seven!

Hats off to Trans-Florida Airlines for all their hard work in helping us to bring this Convair back to flying condition. She has been saved from the chopping block! Thanks again to Bob, Dan and Tom Willman. We still have a lot of work yet to go but we are well on our way to gracing our sky’s with another Convair!

Wing Spar inspected and found to still be in good condition. Corrosion control and replacement of rivets & panels has been completed. All other smoke & fire damaged areas have been cleaned & inspected. Lower aft cargo compartment stripped, cleaned, inspected and zinc cromated.

Aft lavatory was stripped of all panels, inspected and zinc cromated. New lower aft cargo compartment liner installed. Cleaning of the interior continues. The exterior has received its first bath in 4 years. Starboard side #2 prop and hub assembly have been installed.

Port side #1 prop and hub assembly have been installed. Electrical & mechanical connections in the aircraft are continuing at this time.Waiver received for extended operation of both Props without overhaul provided that all SB’s and AD’s are current.

Waiver has been pulled on extended Prop operation on one Prop and the other only a limited time waiver issued.Decision to overhaul both Prop & Hub assemblies has been made, this will cost the organization about $11,000, however we will have two zero time assemblies when finished. We are currently waiting on Grant and or Donation monies for this.Electrical power through the use of a GPU has been applied to the Convair for the first time since 1996. Good News; Wing Flaps and Cowl Flaps operated normal and there were no blown breakers! SWAT training was conducted in the Convair by local Law Enforcement Officials.Avionics work is continuing to get the old radios back in operational use.

Interior work continues, Cockpit is receiving much needed TLC and the Passenger Cabin seats have been cleaned & ArmorAll has been applied. Up-Dated Pictures on this Link

Cleaning and painting in the Cockpit area is continuing and much progress is being made. Please follow the link to see our progress. Cockpit Photos. The overhead bin areas have been taken apart and cleaned and reassembled. This was a much needed job!!

We continue to apply for Grants and monetary support.

We continue to struggle in the fundraising department. Concern over the condition of our Convair 240 in a corrosive environment as opposed to a dry climate is very high!

We have performed an inspection and found the Convair to have extensive corrosion in the wing spar area due to long term storage in a corrosive environment and aircraft not being flown. Many wing panels and rivets have popped open and significant corrosion on the fuselage can now be seen. A decision to sell the Convair 240 has been made.

The sale of our Convair 240 to the U.S.Airline Industry Museum Foundation was completed in April. We received in trade from the USAIMF a Douglas DC-7B N4889C which is located at the Memorial Airport, Chandler, AZ on the GRIC Reservation.

We are currently in negotiations with the GRIC to enter the reservation to start work on the DC-7B for removal. We continue to receive equipment & items donated for our collections.

April: Our museum in Hartford, CT has been moved into storage in Las Vegas, NV where we will set-up our new home in the coming year. We continue to negotiate with the GRIC for entrance onto the airport. We have acquired a DC-7C fuselage nose for our static collection and continue to add to our current collections through the donations program.

January: We have been granted entrance onto the GRIC Memorial Airport, Chandler, AZ for the removal of our DC-7B aircraft & our DC-7C cockpit nose section.

February: We removed the DC-7C cockpit nose from Memorial Airport.

March: We performed the inspection of the DC-7B to determine our plan of attack for removal from the airport.

July: GRIC Memorial Airport board has placed things on hold through the Ordinance Officer and now we are back to square one once again!

November: A very generous donation of a beautiful Piper Comanche PA-24-250 was made to our organization. We will maintain this aircraft in flying condition and use it maintain crew flight statis and general transportation.

March: We set-up a display at the North Las Vegas (VGT) Airport open house. This included our American Airlines B767 Cockpit Nose Display N301AA along with models of same aircraft in service and before scrapping. We also had a display for our book “Junkyard Jets”. Hundreds of people lined up to view our B767 and take pictures inside & out. This was a hands on display for all to enjoy.

April: Our Piper Comanche just came out of Annual Inspection and we will be doing some shake down flights on her soon.

May: The Comanche is now on-line and in perfect condition.

July: We have moved into our new Administrative Offices in Las Vegas, NV and have our archive storage as well as a warehouse to work on our displays for the museum. The location of the museum will be revealed later this year.

The Boeing Company donates parts to help AMA with the restoration efforts of the 2nd Boeing 767 built. Serial Number 2 (N601UA) will be a nice historical piece for the museum and the public to come and tour. More is needed to complete the restoration of the upper forward fuselage section. Please Contact Us about how you can help support this project. 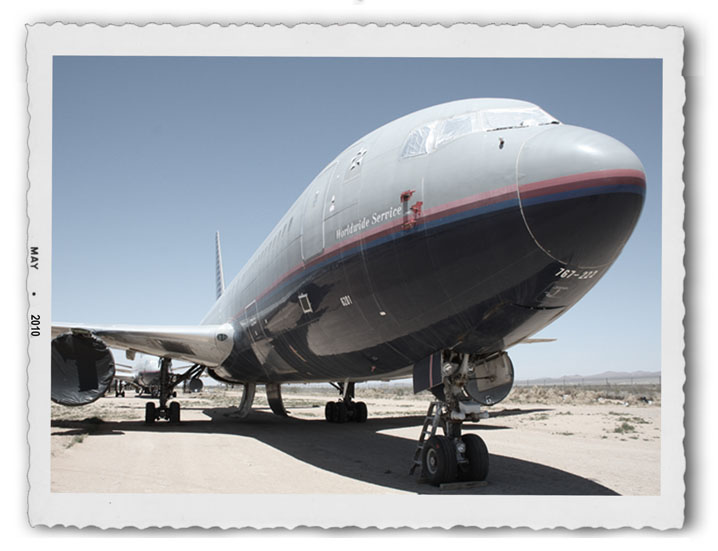